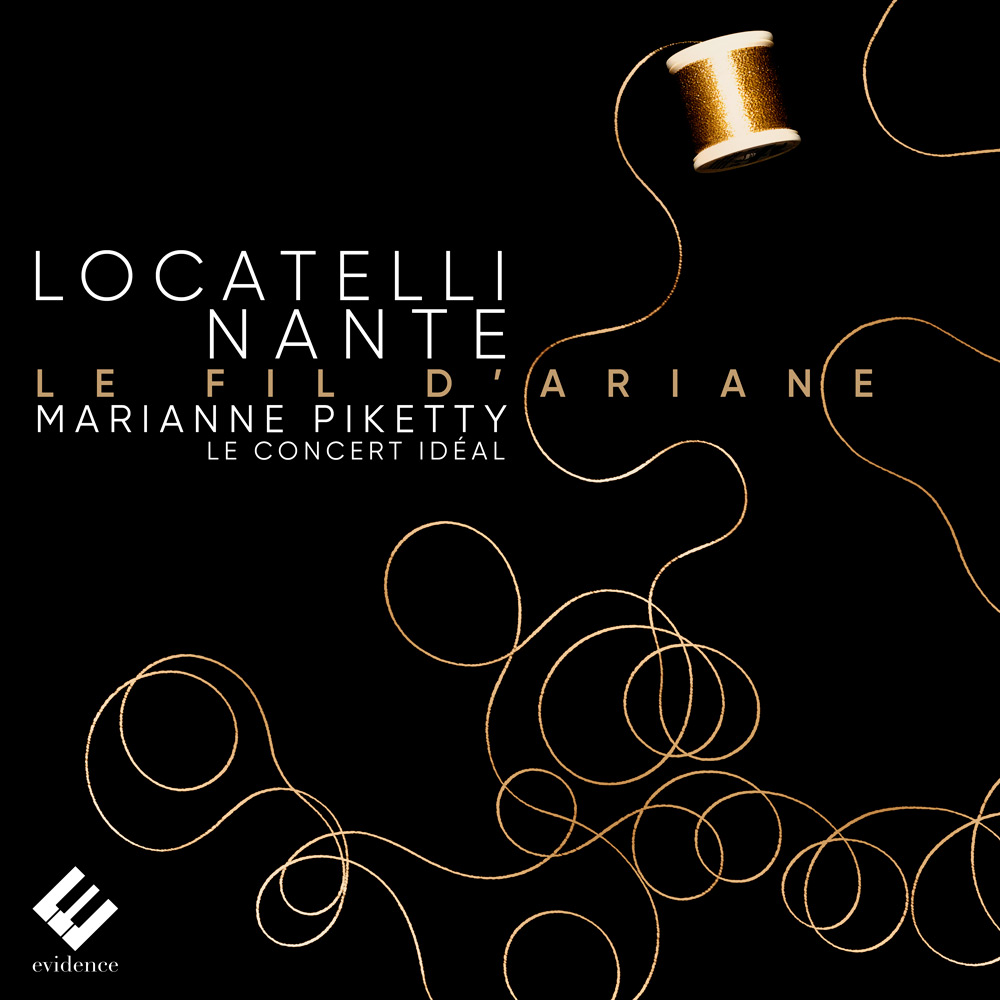 Fil d’Ariane: the 2nd disc of the Concert Idéal!
v=qWKUIgwMHT4

To present this second album, Marianne Piketty, artistic director of Le Concert Idéal, blends her voice with Olivier Fourés’, the artistic advisor of the ensemble, and Alex Nante’s, composer.

Locatelli stared at the spectators for a long time with an “intensely theatrical gaze” before starting to play. He dressed himself “sumptuously with shiny rings” and, “like a devil”, ran his “bow on the string […] like a hare on his violin”, with a “rough” sound that brutalized “delicate ears”, but ended up with “extraordinary agility”, breaking his audience from the expressive power of his “wild flights”.

He is thus one of the most worthy representatives of these Italian baroque violinist-composers who played, with exorbitant eyes, foaming lips, a crazy wig, a nervous contortion in the face and a sonorous foot, spectacular timbres and acrobatics. The audience screamed and let themselves be won over by the trance. We defended ourselves. The fabulous vibrations of these virtuosi were even capable of making the little birds faint. Hearing them was “too painful a pleasure”.

Marianne Piketty, why did you choose to perform works by Locatelli?

“It appeared to me that Locatelli’s music was highly underestimated; yet it has nothing to envy to that of Vivaldi or Corelli.
We could certainly limit our approach to its whims, be fascinated by its exuberant virtuosity, think that its contours are gratuitous or even arid…it would be to miss the essential. Locatelli’s music being far beyond, of pure beauty! His slow movements unfold in a right expression that touches the being at its deepest; just as he is able to awaken joy, jubilation, truculence and mischievous humor through his fast movements…a colorful enthusiasm.
I can easily say that Locatelli’s music is a sound spectrum of the human soul, in which he depicts every stratum: from the most intense drama to the most subtle tenderness.
We have chosen here his most beautiful pages, those that highlight this singular sound universe, not hesitating to bring together identities that are a priori diverse to build our dramatic unfolding.
It is a crossing in the highest sense, that of the whirlwind of life whose cornerstone would be here the Funeral Sinfonia through which we walk, towards silence, to end the journey under the light of Ariadne’s inescapable lament”.

But Locatelli was not just a fairground phenomenon. From Rome to Venice, via Mantua, from his German tours to the city of Amsterdam (where he lived for more than 30 years before he died), Locatelli was at the heart of the cultural broth that was to lead Europe from different tastes to the “reunited tastes” or “gemischter Styl”. It is amusing that this “wandering” musician, a true Italian ambassador in exile, ends his famous Arte del violino with a Laberinto Armonico (“Harmonic Labyrinth”) or his Opus 6 with a concerto entitled Il Pianto d’Arianna (“Ariadne’s Crying”), describing the tears of this princess abandoned by Theseus, whom she had just saved from the labyrinth of Minos by offering her a long thread.

Intertwined with Locatelli’s compositions, my music tries to establish a resonance with the dramaturgy and intense expressivity of the great Italian composer’s works. In this real challenge of proposing a dialogue with Locatelli’s music, I was inspired, on the one hand, by the subtle and contrasting feelings, particularly in Il Pianto d’Arianna, whose very singular formal organization represents the states of the soul; on the other hand, by the overflowing virtuosity of the ensemble and particularly of the solo violin, which evokes a kind of excessiveness, of hybris. It is sometimes the almost diabolical allure of Locatelli’s writing that later inspired Paganini.

How did you meet Alex Nante? And what was the starting point of your artistic collaboration?

MP: “Like Ariane, I went in search of Alex Nante. I looked for a composer whose language could touch me as much as Locatelli’s; a language that had the capacity to evoke travel and wandering, to carry a fire like Locatelli’s, and to embody the resonances of a tragic love.”

The invitation to wander

The most significant element of this imaginary dialogue is the evocation of wandering, present, in part, in the quest for Theseus, but above all in the figure of Ariadne, who, unsatisfied and in solitude, wanders without horizon hoping for Theseus’ return. It is symbolically the wandering of the soul: in its grief, it wanders through arid and silent states or agitated by deep doubts, waiting for a truth that can set it free. The idea of Ariadne’s wandering brought back to the adventure at the center of the labyrinth evokes pilgrimage.

Locatelli’s music is based on a surprising synthesis of his two masters: Corelli and his dialectical clarity on the one hand; Vivaldi’s virtuoso exuberance on the other. It is sometimes tinged with a French-style “tenue”, which is becoming increasingly fashionable in European courts. For as a good Italian, Locatelli is a true Italian. He never ceases to explore and does not hesitate to lose himself in the most improbable tones, the least symmetrical structures, or to twist his fingers far beyond bourgeois pleasure. A “disjointed” style which often disconcerts but which brings up completely new questions.

It is this idea of variety and wandering, of loss of point of reference, that motivated this project. The program presents different islands of Locatelli’s music, between which the composer Alex Nante was invited to drift. A breadcrumb trail that shows how easily differences coexist, and how their confrontations, however paradoxical, are always a vector of freedom.

To construct this dialogue I have tried to embody in my works melodic, harmonic elements and rhetorical figures peculiar to Locatelli’s style. Moreover, the musical universes alternate in a progressive metamorphosis, where the distinction between languages becomes confused. But the true symbiosis occurs in the Lamento of the Sinfonia Funebre. Here, to the accompaniment of the tutti is not added, as usual, an improvisation by the violin soloist, but a solo that I wrote developing various musical materials from the whole journey.

Between Locatelli’s works and my pieces, a new Ariadne’s thread is stretched which serves as a link within this musical labyrinth.

The virtuoso extravagance of the solo concerto and the fantasy for solo violin lead Locatelli towards this typically Venetian rhetoric, all in chiaroscuro and at the same time theatrical and descriptive. The 24 caprices of his Arte del violino bear witness to this – they directly inspire those of the diabolical Paganini – which conclude in a veritable labyrinth while his Opus 6 closes with the concerto grosso entitled Arianna.

What are the qualities of Alex Nante’s music? How does this young composer convert/update Locatelli’s baroque gesture?

MP “What I like about Alex Nante’s music is his sensitivity coupled with his erudition, the density with which he allows himself to embrace the world in its entirety.
He plunges fully into the universe that is presented to him, without any hesitation. He appropriates it to better explore its contours. He doesn’t get lost in it, or else he is not afraid to get lost in it to come out of it enriched, grown up and always more authentic. He lives the adventure with sincerity, which is reflected in his writing.
Working with Alex Nante but also with Olivier Fourés and the musicians of the Ideal concert was exceptionally rich. We allowed ourselves to confront our diverse horizons; we did not draw any limits but rather a common path in search of the interpretations that seemed to us to be the most accurate, the most committed, the closest to us… it was a joyful journey.
It was together that we unrolled our Ariadne’s thread, connecting the islets, gathering the threads of wandering, of the multiple path, of the trial, the one that sometimes guides us and that also knows how to lose us…the one that breaks and brings us together.”

Finally, the one of the quest for the Self, which gives meaning and breath to the lines of this labyrinth that we call: Life.